Here at St. Stephen’s, just as they did in the ancient temple in Jerusalem, we have seven oil lamps burning in a beautiful candelabra in the holy place, behind the holy table. We also burn oil lamps in front of some of our icons. We used to use electric lights and liquid paraffin candles, but the olive oil lamps are more traditional for us. In fact, they go all the way back to scripture – Jesus even uses them in a parable.

While I was at the seminary, they tried to introduce olive oil lamps, but they kept smoldering and going out. They couldn’t figure out the problem, so the olive oil lamps were soon abandoned in favor of more user-friendly, disposable cartridges. When I first started working with oil lamps myself, I kept having the same problem with them. But, eventually, through a process of trial and error, I figured out what was necessary to keep them burning.

At first, I mistakenly assumed that all that was necessary was that they have oil in them, that the wick be submerged in the oil, and that the wick be extended far enough to burn brightly. Eventually, I learned, however, that this is not enough. In fact, it is necessary not only that there be oil in the lamps, but that the oil be sufficiently deep, because, the oil does not want to travel very far up the wick before it reaches the flame. If it has to travel too far it goes out much more quickly. Secondly, it is much more important that the wick has been recently trimmed than that it is extended very far. If you have the wick extended like a half an inch, but you haven’t trimmed it and the oil is not very deep it will still smolder rather than properly burning. Also, if it’s extended that far but the oil is deep enough, the flame will flicker and produce black smoke causing a lot of soot to a build up. It’s better for the wick to be extended just a little – like a quarter inch is enough or even less – be recently trimmed, and have sufficiently deep oil. If the lamp is prepared this way, it will burn long and brightly.

But what does all of this have to do with this great feast of Pentecost? The fiftieth and final day of Pascha, the feast of weeks, the seven times seven plus one day, the last and greatest day of the feast (John 7:37), the day of the first fruits, the day Torah is given to Moses on Sinai, the day the Holy Spirit is poured out upon the apostles? On this day, why am I wasting our time with a tutorial about oil lamps?

Well, remember that when the Lord descended upon the holy mountain to give the Law to Moses, he descended upon it in fire. And when the Holy Spirit filled the holy apostles, “there appeared to them tongues as of fire distributed and resting on each one of them” (Acts 2:3). And remember when our Lord Jesus said, “I have come to cast fire on the earth and would that it were already burning” (Luke 12). And do not forget that “our God is a consuming fire” (Heb 12:24). The image of fire is worthy of our meditation, especially on this day of Pentecost.

It is not without reason that we burn the oil lamps in front of the holy images of Jesus Christ, his mother, and his saints. His mother, the Theotokos, herself is like the burning bush in the desert, always burning but never consumed, through which Moses encounters to the Lord. Through her, God becomes man, so through her all people can encounter God. She and all the deified saints are themselves become all fire – a consuming fire, like God – one with God. The lamps burning before them remind us of the tongues of fire that rest upon all those filled with the Holy Spirit – and of the baptism of the Holy Spirit and of fire they have all received, has prophesied by John the Baptist.

So I think these lamps are a good symbol and a good image of the Spirit-filled life we are to live. And I even think that the mundane task of tending these lamps can teach us something about the spiritual life.

I am reminded of one of the sayings of Amma Syncletica. She says,

“In the beginning, there are a great many battles and a good deal of suffering for those who are advancing towards God and afterwards, ineffable joy. It is like those who wish to light a fire; at first they are choked by the smoke and cry, and by this means obtain what they seek, as it is said: ‘Our God is a consuming fire’ (Heb.12:24): so we also must kindle the divine fire in ourselves through tears and hard work.”[i]

When we begin to move toward God – to live the life of the Spirit – we are at first very often frustrated. At the beginning, there is struggle and suffering. When I first tried to tend the oil lamps, I couldn’t keep them lit. Amma Syncletica says that when we first try to light a fire we end up choked by the smoke. The smoke gets in our eyes causing them to tear up – causing us to cry. This is how the life of the spirit must begin – with tears.

Well, it’s interesting the way that this works with these oil lamps. You get that black smoke pouring out of the lamp when your wick is too high. Now, the wick is the external part of the lamp. It’s the part that burns – that gives light. Without it, you’ve got nothing. But with too much of it, you’ve got black smoke. The smoke which brings tears. The black smoke is our folly and our sin, over which we should weep. One way to raise a stink and lots of smoke is with too much focus on the externals – with too much wick and not enough oil.

The oil is the internal part of the lamp. And it’s like our spiritual center. Remember we are chrismated with oil – with chrism that is the seal of the gift of the Holy Spirit. And it’s more important for the oil to be deep than for the wick to be long. If all we do is make a show of our faith and our religion and we have in our hearts no real loving relationship with God and our neighbor, it is like we have long wicks and shallow oil. We may burn brightly, but – if so – briefly and soon we smolder and go out.

If we really are filled with zeal for the house of the Lord but we often misdirect that zeal and turn people away from God’s house and scare them off with our judgmentalism or our excessive pharisaical concern for external details, then perhaps we are like a lamp with deep oil and too much wick. We burn long and brightly but at the same time make more smoke and heat than light.

Now if we’re like those who get scared off or for whatever reason reject the Church and true religion and avoid the liturgical services and the holy mysteries. Or, if we claim to be spiritual but not religious, then it is like we have no wick at all. Our oil may be deep or it may be shallow, but it cannot burn.

The way to stop the flicker and the smoke is not to get rid of the wick, but to trim the wick. Weep and confess our sins. Cast off our own excesses. And after this do the hard work of tending the lamp – of constantly checking and refilling the oil – of constantly trimming the wick and extending it neither too much nor too little.

“Abba Lot went to see Abba Joseph and said to him, “Abba, as far as I can say, I do my little office, I read my psalms, I fast a little bit, I pray and I meditate, I live in peace with others as far as I can, I purify my thoughts. Tell me, Father, what else, what more can I do?” Then the old man, Abba Joseph, stood up, stretched out his hands toward heaven, and his fingers became like ten lamps of fire, and he said to him, “If you will, you can become all flame.”

Our vocation is nothing less than this: By the power of the Holy Spirit to become all flame – like a consuming fire – like God 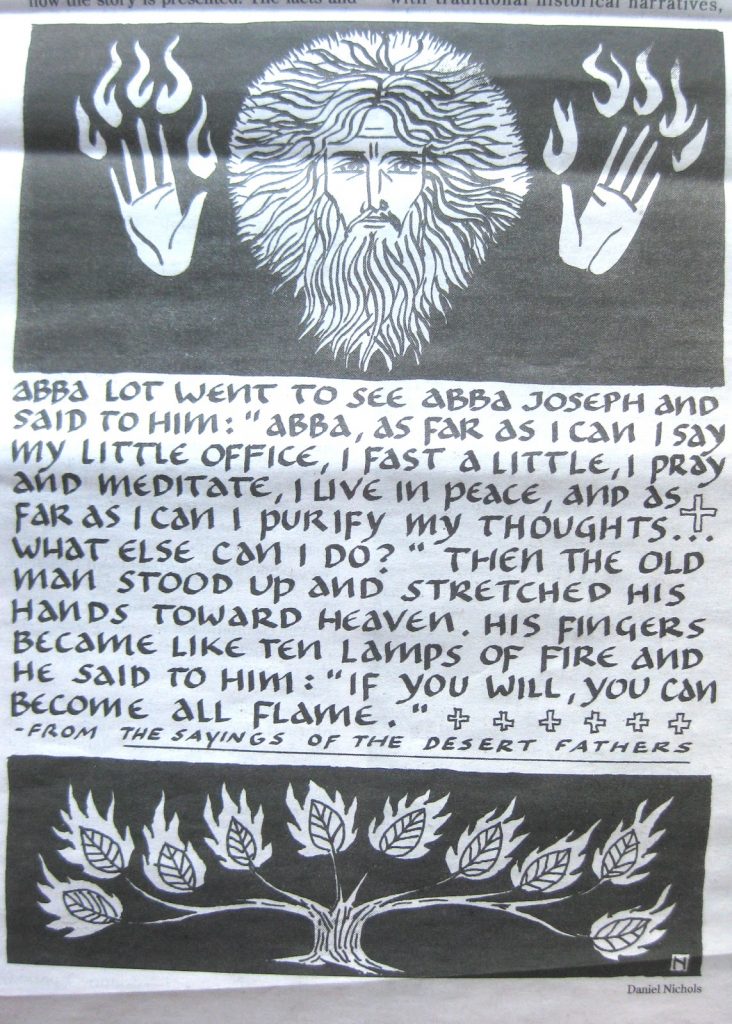 [i] (as quoted by Laura Swan in The Forgotten Desert Mothers (Paulist Press, 2001).