There’s an infamous story about Kitty Genovese who, in 1964, was knifed in her neighborhood in Queens. She screamed for help. And more than a dozen heard her cries. Yet no one did anything to help or to intervene. Reports have often exaggerated the details of this event, but the fact remains that at least one witness knew she was stabbed and yet did nothing. Not until she was attacked yet again by the same man did someone else call the police. And by then it was too late.

You see, Jesus’ parable today is not so far-fetched. People really act this way sometimes. The priest and the Levite witness the suffering of a fellow man and yet do nothing to intervene. This happens in incidents that grab headlines and it happens in our daily lives. 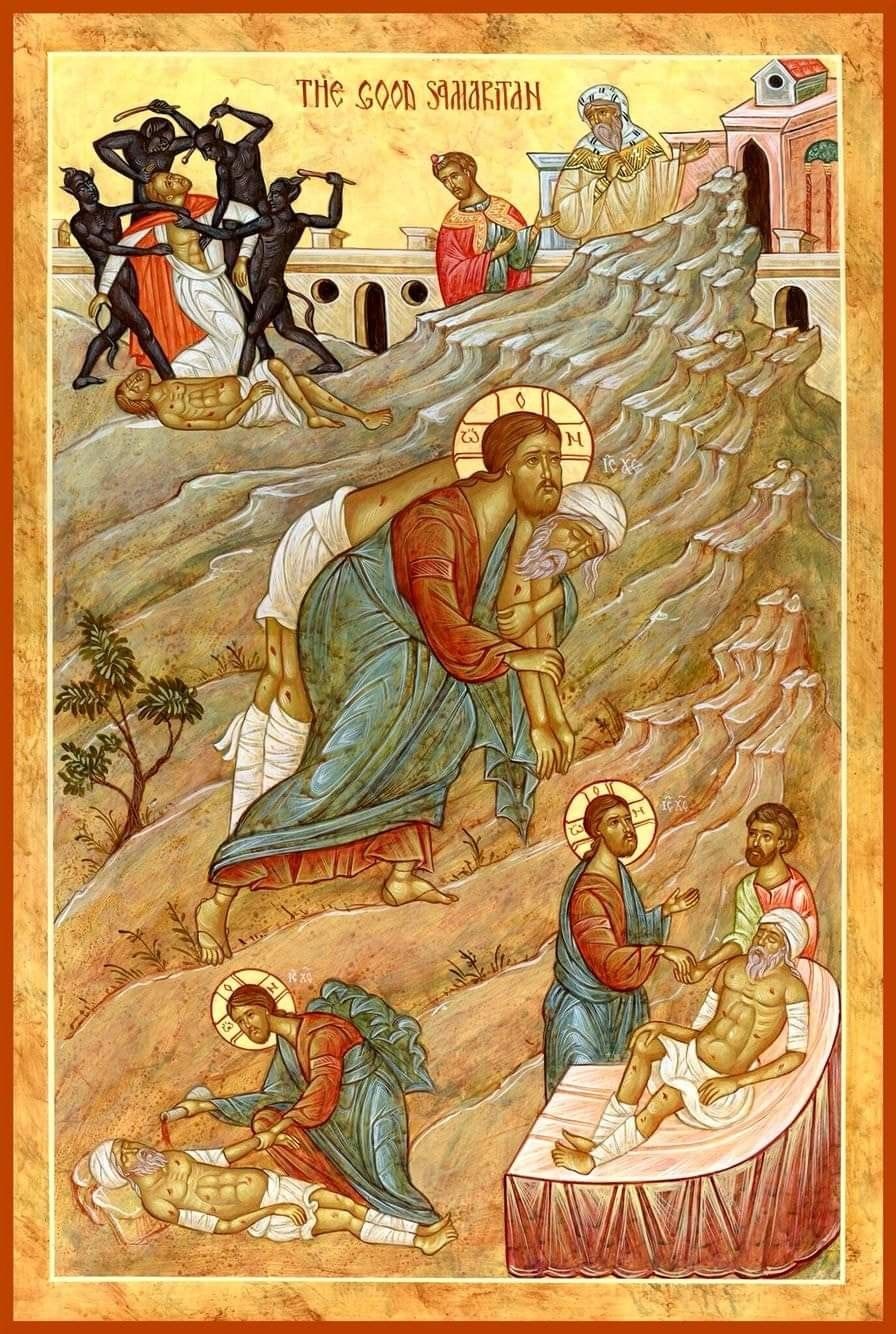 I hope not many of us have had to witness such atrocities. Those of us who have, I hope, have done something to intervene. But for all of us, it isn’t difficult to find human suffering. Even if our suffering is not so great, we all do suffer and we all, daily, encounter the suffering of one another. If we read the news, it will mostly be about suffering. At work, we may witness spiteful and petty cruelties between coworkers. In our families, we may deal with illnesses. When we go into the city, we may encounter homelessness and addiction.

In my experience, everywhere we go, we see suffering. And wherever we recognize the suffering of another, we may take that recognition, I believe, as a calling from God to intervene. To be an instrument of God’s healing and help. To be a neighbor.

What we should do in each given situation requires discernment, but we can trust that God has put us in the situation for his purposes. Each and every time. There is nothing random or arbitrary about the situations we find ourselves in, though it may seem that way. In truth, God has put us there. And it’s not to bring harm or callousness, but to bring healing and compassion. If you are witnessing human suffering, God is calling upon you to be a neighbor to the one who suffers.

The lawyer, desiring to justify himself, asks Jesus, “Who is my neighbor?” The witness of Kitty Genovese’s attack must have thought, oh she is someone else’s neighbor. Someone else’s problem. Not mine. It’s nothing to do with me. Leave me out of it. When in fact, each witness is given an opportunity by God – not by random chance or accident (which does not exist) but by God, who personally knows and loves every victim, every witness, and every sinner.

When the man is beaten by robbers, God sends him a priest. God calls upon this priest to intervene for good, to help, to show mercy. To the priest, God gives the first opportunity to act as God’s instrument of healing. But the priest passes him by on the other side. He passes by the robbed and beaten man – and he passes by the calling of God in that moment – and he passes by the image of God lying in the dirt. So, when the priest fails to do his will, God sends a Levite. And when the Levite fails, God sends a Samaritan, who acts in every way as an image of Christ to the robbed and beaten victim.

Now Samaritans and Jews would ordinarily have nothing to do with one another – they were enemies – but this Samaritan gives no consideration to that. He sees past that tribal acrimony to his common humanity with this bruised and battered Jew from Jerusalem he finds lying in the road.

Our common humanity has its grounding both in the earth we’re made out of and in the breath of life – the ruach – the spirit that God breathes into our nostrils. We are earth with God breathed in – and no human divisions can surmount that common identity.

Our neighbors are not only those with whom we have certain kinds of kinship. Not only our family members and friends. Not only our coreligionists. If we were to assist only those who share our faith, we would thereby prove the enemies and critics of faith correct. They say that faithful religious people are the cause conflict and violence. This becomes true if we fail to live our faith truly.

How often, desiring to justify ourselves, we say, “Well maybe I’m not perfect, but at least I’m not like so and so. At least I don’t want to do this or that evil. Ugh, how can a person even be tempted by that sin? I’m so far above that.”  Believe me, our own sins are no better. St. Mark the Ascetic writes that “the devil makes small sins seem smaller in our eyes, for otherwise he can’t lead us to greater evil.”[i] The very fact that our own sins look so innocent to us reveals the depth of our depravity.  How much we stand in need of the cross and of the Lord’s forgiveness and his great mercy, available to us all in the holy mystery of repentance.

We enter this week on Friday into the Philip’s Fast, which is a season of repentance. This is an especially good time of year for us to identify with all the other sinners in the world, to stop thinking ourselves better than others, to repent, to confess our own sins rather than listing the sins of others, to fast and to give to the poor, to pray for peace on earth, to be a neighbor to all.

So be a neighbor to all people, not because all people are equally right, or because there any truth the relativistic nonsense that “your truth is true for you but not for me,” but because being right is never a person’s deepest identity. Our deepest identity is that which God creates in us – his own image. Therefore, we must never allow our differences with other people – even when they’re in the wrong – to justify any hatred or indifference toward them.

Paul writes, “There is… one Lord, one faith, one baptism, there is one God who is father of all, who is above all, and through all, and in all” (Eph 4:5-6). That is our relationship with all others. Always bear this in mind. It makes us neighbors of all people, even our enemies. As St. Gregory the Theologian writes and as we sing each Pascha, “Let us call brethren even those who hate us.”