Seeing a paralyzed man, Jesus says to him, “Your sins are forgiven” (Matt 9:2). Do you think this is why the people of Jesus’ own city brought to him a paralytic lying on a bed? So that Jesus would forgive his sins? I think these words may have been rather surprising to them. 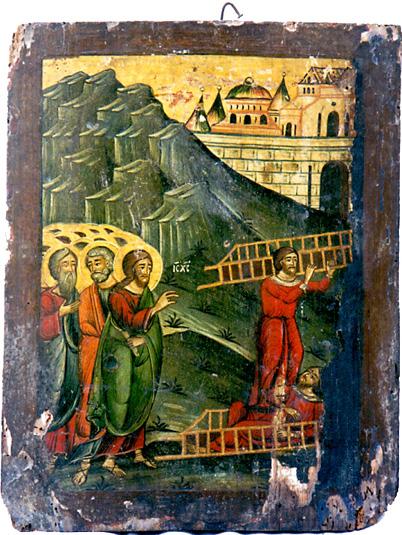 He had just come from exorcizing the Gadarene demoniacs, as we heard last week (8:28-34). And he had just healed many people. He cleansed a leper who knelt before him saying, “Lord, if you will, you can make me clean” (8:2). He healed the centurion’s servant who said, “Lord, I am not worthy to have you come under my roof, but only say the word and my servant will be healed” (8:8). Seeing Peter’s mother-in-law with a fever, he touched her hand and the fever left her (8:14-15). He cast out many demons and healed all who were sick (8:16). With all that healing – a whole chapter full of it leading up to this moment – he never mentions sin. Not until this paralytic is brought before him in his own city.

In fact, this is the first time in the gospel of Matthew that Jesus uses the word ἁμαρτία – which we translate as “sin.”

This word literally means “to miss the mark.” It is to do other than what we are created for. It is like hammering with a screwdriver. There is a better way. Just as a poor marksman can do all sorts of harm with his misspent arrows (those arrows can end up in his friends rather than his enemies) we sinners wreak havoc upon the world – upon others and ourselves – with our sin. When we speak of sin, it is helpful to bear all this in mind. Sin is not merely rule-breaking, but failure to fulfill our own created purpose.

Though not from Jesus until this moment, we do hear of sin from the beginning of the gospel. Remember, the angel of the Lord told Joseph that Jesus would “save his people from their sins” (1:21). And those who came to be baptized by John with a baptism of repentance (Matt 3:11; Acts 19:4), confessed their sins (Matt 3:6). When Jesus first began to preach, the first words he preached were in quotation of John the Baptist, saying “Repent, for the Kingdom of heaven is at hand” (3:2). He preaches repentance from the first, and repentance is to do with sin and includes the confession of sin (3:6). In his sermon on the mount, Jesus speaks of σκανδαλίζω, which is stumbling or giving offense, and is also related to sin.  But, still, Jesus himself first mentions sin – ἁμαρτία – in direct connection to illness, when he sees this paralytic brought to him. I suppose that’s a rather dubious distinction. How would you like to be the first person that Jesus calls a sinner?

Well, we’re all sinners and in need of his forgiveness, so his words, “your sins are forgiven” were surely welcome even if surprising. Some of us may have objected, “What sins? What are you talking about?” But this paralytic has more humility than that. In fact, he says nothing at all in this whole exchange.

The people were surprised to hear Jesus forgiving the paralytic’s sins because this wasn’t the pattern that Jesus had established. They knew he was healer who healed the sick who were brought to him. So, when they brought to him the paralytic, they surely expected that Jesus would immediately heal him and give him once again the power to walk. He does get to that, but he focuses first on the forgiveness of sins and the people are surprised. Some of them are not only surprised but scandalized because they think Jesus is a blasphemer and do not understand who he is. But all are surprised, I expect.

In a similar way, perhaps we are surprised to hear the prayers for forgiveness of sins in the holy mystery of anointing. We come to the presbyters of the Church to be anointed when we are ill, as St. James instructs us (James 5:14). We come hopeful of healing like the paralytic, and we are suddenly treated to prayers for the forgiveness of our sins, like the paralytic. Holding the Gospel book over the head of the sick person, the priest prays,

“O Holy King…, you do not desire the death of a sinner, but rather that he repent and live. I do not place my sinful hand upon the head of your servant who comes to you in sin, asking from you, through us, the forgiveness of sins; rather, I place your strong and powerful hand which is in this holy Gospel…. Receive your servant who has repented of his sins, and forgive all his transgressions.”

Hey! We didn’t say we were sinners, did we? We only said we were sick and need healing! What’s all this talk of us being sinners in need of forgiveness? Doesn’t that belong in the sacrament of confession rather than anointing? In truth, these two holy mysteries are intimately linked. Holy Anointing is also for the forgiveness of sins and Holy Repentance is also for healing. Indeed, from a certain perspective, forgiveness is healing and healing is forgiveness. Our souls and bodies are not two separate things in need of two separate remedies – but they are one. We are both spiritual and bodily, and we need both forgiveness and healing in both spirit and body. And our Lord, the Physician of our souls and bodies, is eager to provide us with both. When he looks upon us, he sees the whole us, with nothing left out. He knows us inside and out and through and through.

When he sees the paralyzed man, he knows he needs healing but he also knows he needs forgiveness and that these two things are really the same thing. Immediately, there is a connection drawn between paralysis and sin.

Now, in the Gospel of John, we learn that a man is born blind not because of any sin (John (9:2-3). But now Jesus sees a man paralyzed, and knows that he is a sinner in need of forgiveness. Of course, the Jesus knows everything. He knows who is a sinner and who is not. Which is to say, he knows that “all have sinned and fallen short of the glory of God” (Rom 3:23). And that we all are in need of forgiveness. Still, I believe there is a connection here between this man’s paralysis and his sin. It is not the causal connection, perhaps, that we immediately jump to. We look for someone to blame. We say, it’s his own fault. He brought it on himself. He is a sinner, and this paralysis is the wages of his sin, just as ultimately death will be the wages of sin. Or, we may say it is the sins of others that have led to this. The man born blind shows us, I think, that that is not always so clear-cut.

He demonstrates that he does have the power to forgive sin because he also has the power to end paralysis. The one power proves the other, he says. Perhaps this is because they are, in one sense, the same power. They are the power of God over sin and paralysis, over all illness, over all suffering, and even over death. These are our enemies that the Lord will ultimately defeat and destroy. This really may be boiled down to good over evil. Paralysis and sin are in the same camp – the camp of evil. And that whole army of evil ones is subject to God. He will drive them out before us.