If you have faith like a mustard seed, you will move the mountain. And nothing will be impossible for you. (Matt 17:20).

A mustard seed is tiny, but its tininess is not the whole story. Remember, the littleness of the disciples’ faith is the reason they cannot move the mountain – that they cannot cast the demon out of the boy and heal him.

This, by the way, is what it means to move a mountain, in my opinion.[i] Most of us have a mountain in our lives that needs moving. It’s found most often deeply rooted in our hearts. And there’s usually a demon or two who planted it there and who try to keep it there.

If we had faith like a mustard seed, we would say to that mountain of passions or addiction; ill-will, resentments, or unforgiveness; selfishness and self-centeredness; gluttony, lust, and wickedness; unkindness, impatience, and failure to love – we would say to that mountain in our hearts, “move.”[ii] And it, with all its attendant demons would “be taken up and cast into the sea” (Matt 21:21), that is, into the abyss of hell,[iii]where all such inclinations and the demons that harbor them belong.

You know as well as I do, it would be easier to move a mountain in the literal sense. Butnothing will be impossible for us if we have faith like a mustard seed.

The tininess of the mustard seed is an important part of the power of the image, that’s true, and Jesus speaks about that in another place (Matt 13:32), but to overfocus on that attribute alone causes the image to lose its potency. If we think a little faith is enough because we hear our faith should be like mustard seed, we may have missed the point.

When we say to one another, “have a little faith,” I hope we don’t mean it in the sense that Jesus does when he tells his disciples that they fail to cast out the demon because of their “little faith” (Matt 17:20).

Size alone is not the point. It’s important that we’re speaking here of a grain of mustard and not a grain of sand. There’s a world of difference between the two – and the difference is life.

Jesus is not, I think, making a quantitative comparison between the littleness of the disciples’ faith and the size of the mustard seed, as if their faith was even smaller and they only need a bit more of it. Rather, I think he’s making a qualitative comparison between two tiny things. If your faith is so little, let it be little in the way that mustard seed is little – not like a grain of lifeless sand, but like a grain of living seed. It’s alright to have a little faith, as long as it’s little in the way that a mustard seed is little and not in the way that the disciples’ faith was little that day. The difference is life, growth, & potency.

St. Paul speaks of having “all faith so as to move mountains” (1 Cor 13:2). The kind of faith that moves mountains is not “little faith” but “all faith.” Faith that is like a mustard seed is total faith.[v] A mustard seed is tiny, but it contains the whole. It has the total mustard plant within it – a great shrub rather like a tree, “so that the birds of the air come and make nests in its branches” (Matt 13:32; cf. Luke 13:19).

Jesus also teaches that a mustard seed is like kingdom of heaven. So, let our faith be like the kingdom – small, maybe, but full of life and spirit and capable of growing to greatness.

How can a mustard seed move a mountain? Only because it can do something a mountain cannot do: it can grow. It is alive and not lifeless rock. And life always wins. Patient growth has the power to reshape the whole earth.

If we have a living, growing faith, we can trust that that mountain within us that needs to move will move. We can see it begin to erode, in fact – its stones broken by the growing roots of our faith, weakening to rubble the mountain that seemed immovable and preparing it to be swept away by grace. 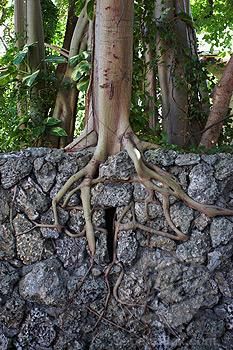 In the meantime, if our faith is little in the way that shouldn’t be, how are we to transform our faith into the faith that is like a mustard seed? One way is by the prayer and fasting that today Jesus says is necessary to cast out this kind of demon (Matt 17:21). Such is necessary because, through these means, God transforms our faith from some dry and lifeless assent to propositions into a living seed of the word within us, that grows and grows, like life in a womb.

A mustard seed is an embryonic mustard plant. The kingdom of heaven is like an embryo. An embryo can grow to become a king. Growth is key. Life is that which grows. If we stop growing, we’re dead. Eternal life is eternal growth. Let us grow ever closer to the infinite Lord for all eternity, and let us begin to grow today.

[i] “The mountains here spoken of, in my opin­ion, are the hostile powers that have their being in a flood of great wickedness, such as are set­tled down, so to speak, in some souls of various people.” Origen, com­mentary on matthew 13.7.

[ii] “If they had had this faith within them, they would have been like the grain of mustard seed. By the power of the Word they would have thrown out this burden of sins and the heavy mass of their unbelief. They would have transferred it, like a mountain into the sea.” hilary of poitiers. on matthew 17.8.

[iii] “Then such a man will say to this mountain—I mean in this case the deaf and dumb spirit in him who is said to be epileptic— “Move from here to another place.” It will move. This means it will move from the suffering per­son to the abyss.” Origen, com­mentary on matthew 13.7.

[v] “When someone has total faith…, then he has all faith like a grain of mus­tard seed” Origen, com­mentary on matthew 13.7.